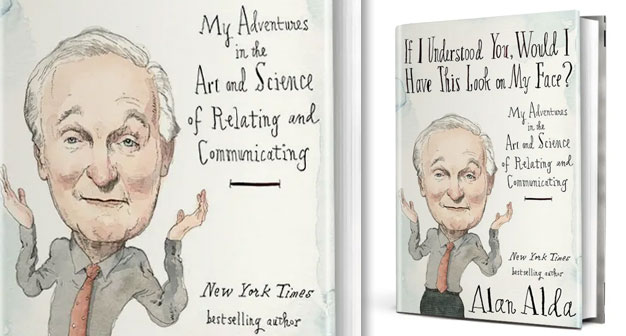 Many of the TV audiences across the world know Alan Alda for his role in M*A*S*H. This television series was an adaption of the 1970 film of the same name. It was about a team of doctors serving in South Korea during the Korean War. Over the past five decades, Alan has won international fame as an actor, director, and writer. He was also nominated for the Academy Award in 2004.

It was for his role as a supporting actor in the movie The Aviator. He has some memorable performances in films such as Everyone Says I Love You and Manhattan Murder Mystery. The more recent appearances of the actor include the one in Steven Spielberg’s 2015 film Bridge of Spies. From 1990 to 2005, he was the host of an American science television show called Scientific American Frontiers.

Alan Alda was born on the 28th of January 1936 as Alphonso Joseph D’Abruzzo. When he was a child, he was frequently traveling with his parents around the United States. His father, Robert Alda, was a performer in Burlesque theaters. His mother, Joan Browne, was a former winner of a beauty pageant and a homemaker. When he was seven years of age, he had to combat polio.

To cure his disease, his parents had to administer a painful treatment regimen. It involved applying hot blankets made of wool to his limbs. After receiving his Bachelor of Arts degree in 1956, the actor entered the United States Army Reserve. Later he went through a year’s service at Fort Benning. He also had a six-month service in Korea as a gunnery officer.

Alda was a member of ‘Compass Players’ in the 1950s. It was an improvisational theater revue and Paul Stills was its director. This was the beginning of Alan Alda’s acting career. From 1958 to 1959, he was a member of an acting company at the Cleveland Play House. This gave him the chance to appear in productions, such as Monique and To Dorothy a Son.

In 1964, he made an appearance opposite Diana Sands in the stage version of The Owl and the Pussycat. The Apple Tree, a musical series on Broadway, gave him the chance to perform with Barbara Harris in 1966. For his role in the series, he had a nomination as Best Actor for the Tony Award.

From 1964 to 1965, he was a part of the television version of That Was The Week That Was. In this American television show, he had the chance to act with David Frost, Buck Henry, and Henry Morgan. His Hollywood debut was in Gone are the Days! as a supporting actor. This was the film version of a Broadway play called Purlie Victorious.

In 1968, Alda appeared as George Plimpton in the movie Paper Lion. He had the chance to perform with Jacqueline Bisset and Barbara Parkins in the occult-murder-suspense thriller The Mephisto Waltz. During this time, he also appeared in What’s My Line? as a panelist. This was the revival of a game show from the CBS Television Network.

An audition in 1972 resulted in his selection for the role of Hawkeye Pierce in the television series M*A*S*H. This was the TV adaptation of a 1970 black comedy film MASH. For his role in this television series, he had 21 Emmy Awards nominations. He won five of them. Alda also had the opportunity to write 19 episodes in this series.

Among them were the series finale Goodbye, Farewell and Amen, which he also had the chance of directing. For the series, he would commute from Los Angeles to New Jersey every weekend. As he didn’t know at the time how long the show would last, he didn’t move his family to Los Angeles. Alda’s father and half-brother also appeared along with him in one of the episodes.

The first five seasons of M*A*S*H was more of a traditional ‘service comedy’. Alda began gaining control over the series as the original writers of the series started leaving gradually. He had become a creative consultant and producer towards the final seasons. The series, which had its foundations in comedy, began assuming a more serious tone under him. It gradually began addressing some political issues.

As a communication trainer

Alda was the founder of Alan Alda Center for Communicating Science in the Stony Brook University. He became a visiting professor at the university in the following year. He also serves on the advisory boards of the Future of Life Institute and World Science Festival. In 2014, he also won recognition from the Society for Technical Communication.

This was in recognition of his work at the annual Flame Challenge and the Center for Communicating Science. While helping scientists communicate more effectively, he had the chance to use his expertise in acting and communication. For his excellent work in science communication, he also won the James T. Grady-James award.

As an actor, he was constantly honing his skills in communicating science on television and stage. He had the opportunity to apply these skills while teaching scientists some innovative communication techniques. In 2021, his pioneering work won him the Distinguished Kavli Science Communicator award.

With this award, the Kavli Foundation recognized his skills in communicating the excitement, marvels, and mystery of science.

This cross-disciplinary organization helps scientists in learning how to communicate more effectively. Their training at this center helps them immensely in their communications with the media, funders, policymakers, and students. As an actor, writer, and science advocate, Alan Alda was the inspiration behind the founding of this center.

It came up with the ‘Flame Challenge’ in 2012. As a part of this challenge, the scientists had to come up with the best explanation for a flame. It was intended for an audience comprising kids who were 11 years of age. The center also honored Alda in 2013 by giving the center his name.

Alan Alda Center for Communicating Science offers programs that have their roots in the Alda Method. This is a form of communication training, which uses the exercises of improvisational theater. The improvisational workshops are highly beneficial for scientists and researchers and had 15,000 attendees by 2020.